"Former Mayor of Nketoane Municipality and accomplices sentenced for fraud."

More often than not we see those who hold public or prominent positions in society make the headlines for links to financial crimes such as bribery, fraud or corruption. In order to tighten the reins on these crimes, the concept of Prominent Influential Persons (PIPs) and Politically Exposed Persons (PEPs) were introduced. The Financial Action Task Force (FATF) defines a PEP as an individual who is or has been entrusted with a prominent public function.

These concepts were amended when the Financial Intelligence Centre Amendment Act (FICAA) of 2017 came into effect. The overall concept of PEPs/ PIPs still remained the same but are now being classified as Domestic Prominent Influential Persons (DPIPs) and Foreign Prominent Public Officials (FPPOs) to better distinguish between foreign and domestic PEPs.

As you can see from frequent news headlines, due to their position and influence, individuals in prominent public functions are more likely to be faced with Money Laundering offences or other related offences, such as corruption and bribery. DPIPs family and close associates should also be considered as high risk as in some cases they even go as far as using the people around them to try and avoid any suspicion in their personal capacity. 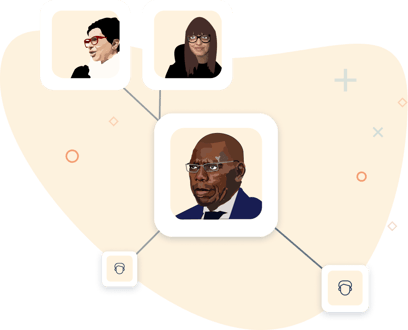 A relevant example of this being the Digital Vibes scandal that took place in 2021 where funds intended for "a COVID and health communications project" were actually diverted to the family members and close associates of the Minister Health. Another example of funds being distributed to known associates or family members was the VBS saga that was identified in the Werksmans report.

However, the task of identifying these individuals has always proven to be tricky and often time consuming as there is no public list that contains the ever changing names of South African DPIPs. The FIC Act also does not specify the exact methods for identifying DPIP’s and so Accountable Institutions often have to rely on open data sources or a client’s disclosure when asked if they are a prominent or influential person or related to these persons. This information should be taken at face value as clients might not be telling the truth and open data sources can be outdated.

All things considered, just because a person is in a prominent or public position doesn’t mean that you should avoid doing business with them. Instead you should create and document a process on how to identify these individuals, as well as, once identified there should be further steps in place to screen these individuals’ source of funds, conduct regular customer due diligence (CDD) reviews and Senior Management to give their sign off prior to entering into a business relationship or undertaking a single transaction.

The FIC recently published Public Compliance communication 51 (PCC 51) which provides guidance on DPIPs, FPPOs, their immediate family members and known close associates. As stated in PCC 51, if a person no longer meets the definition of holding either a DPIP or FPPO position, the risk factors relating to having been a DPIP or FPPO may still be relevant in determining the money laundering risk associated with the client.

In a worldwide first DocFox has set out - and achieved - to have the most comprehensive South African DPIP database. With this database Accountable Institutions no longer have to rely on potentially outdated data sources, unreliable client disclosures and no longer have to waste time manually researching each individual DPIP. DocFox will automatically notify you if any person or entity loaded onto DocFox is a DPIP in South Africa. For an additional layer of due diligence we have also added the World Bank Debarred list.

To ensure you get the most up-to-date results our compliance team scours the latest financial crime related headlines and adds the names of individuals involved to the DocFox screening database to ensure that you truly know who your client is and if they are involved in any untoward scandals.