On 19 September 2021, President Cyril Ramaphosa authorised the release of the long-awaited report by the Special Investigation Unit (SIU) into the National Department of Health’s tender award to Digital Vibes.

Between January 2020 and February 2021, Digital Vibes received a total of R150 million from the Department of Health intended for the National Health Insurance (NHI) campaign and vital public communications around the current Covid-19 pandemic.

Instead, very little of these funds were used for legitimate work as the majority of the funds were diverted to individuals for the personal benefit of themselves, family members and associates.

The tender was found to have been awarded improperly and led to the resignation of the Minister of Health, Dr. Zweli Mkhize, as well as seven government officials being investigated for misconduct and served with letters of suspension.

Understanding the importance of related parties.

Tahera Mather and her niece, Naadhira Mitha, who controlled Digital Vibes, were alleged close associates of the former minister, and Mather was the Minister’s former strategic communications advisor.

The SIU found that they committed fraud by using Digital Vibes as a front to hide the fact that they were tendering for the NHI media campaign contract and “disguised” that they are close associates of Mkhize.

The report further notes that Mather and Mitha contravened the provisions of the Prevention and Combating of Corrupt Activities Act in that they paid and received gratifications resulting from the fact that the National Department of Health had irregularly and unlawfully awarded contracts to Digital Vibes.

This highlights the need to continuously understand the related parties and ultimate beneficial owners (UBO) , as well as identifying any political exposure through Domestic Prominent Influential Persons (DPIPs). As mentioned in a previous article, the concept of a DPIP was created as there is a clear need (as we see in the case of Digital Vibes) for a broader range of politically or publicly exposed persons that should be identified as a source of potential risk.

Where did the money go?

In addition to purchasing personal luxury goods on bank cards belonging to Digital Vibes, Mather and Mitha were found to have made large gratuitous payments to themselves, family members and associates.

In an assumed attempt to disguise the illicit transactions, many of these were made either through companies owned by Mather or Mitha, or their associates and family members.

Whilst the former Minister of Health, Dr. Mkhize denied that he or his family had benefited from the Digital Vibes deal, the SIU investigation proved otherwise and evidenced that Dr. Mkhize and his son, Dedani Mkhize, received over R3.8 million.

The majority of funds received by Dedani Mkhize were paid by Digital Vibes through EFTs made to a wholesale cash and carry who then delivered the equivalent in cash in discreet boxes, but payments were also found to have been made to him directly as well as a car dealership.

Are your clients or potential clients on the list?

Whilst it is possible to comb through the SIU report and leverage the names of individuals and entities identified as part of your client due diligence process to help assess any potential financial or reputational risk, at DocFox, we believe in going the extra mile.

Which is why our research team has done it for you and also identified that many of the named individuals have links to multiple companies and individuals not named in the SIU report. Our team has added these names and companies to our comprehensive Watchlist Screening database under the category “Corruption Watch”.

If there is a possibility that one of these potentially higher-risk individuals or organisations is a current client, or attempts to become one, DocFox will alert you so that you can better assess your position and potential risk. 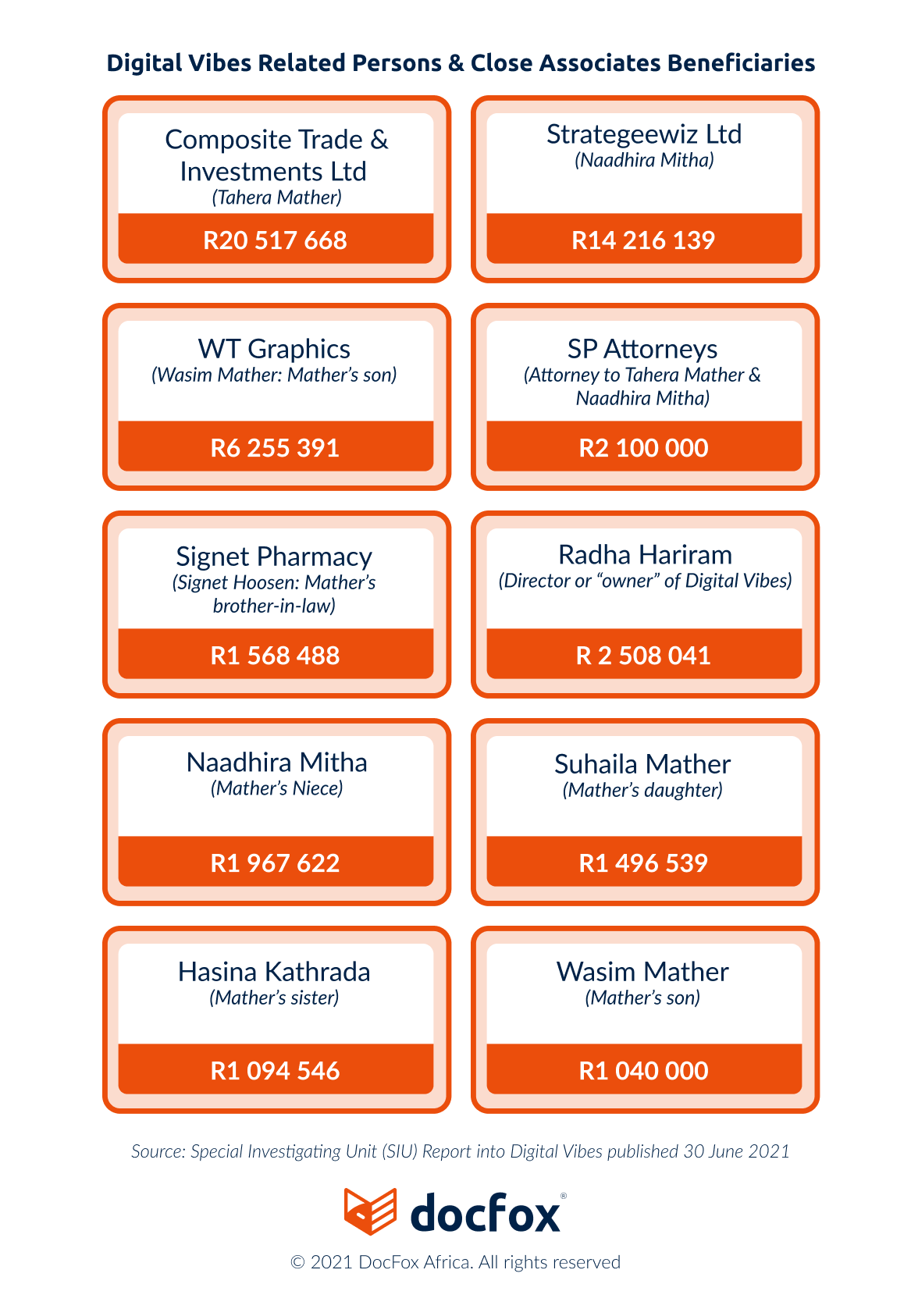 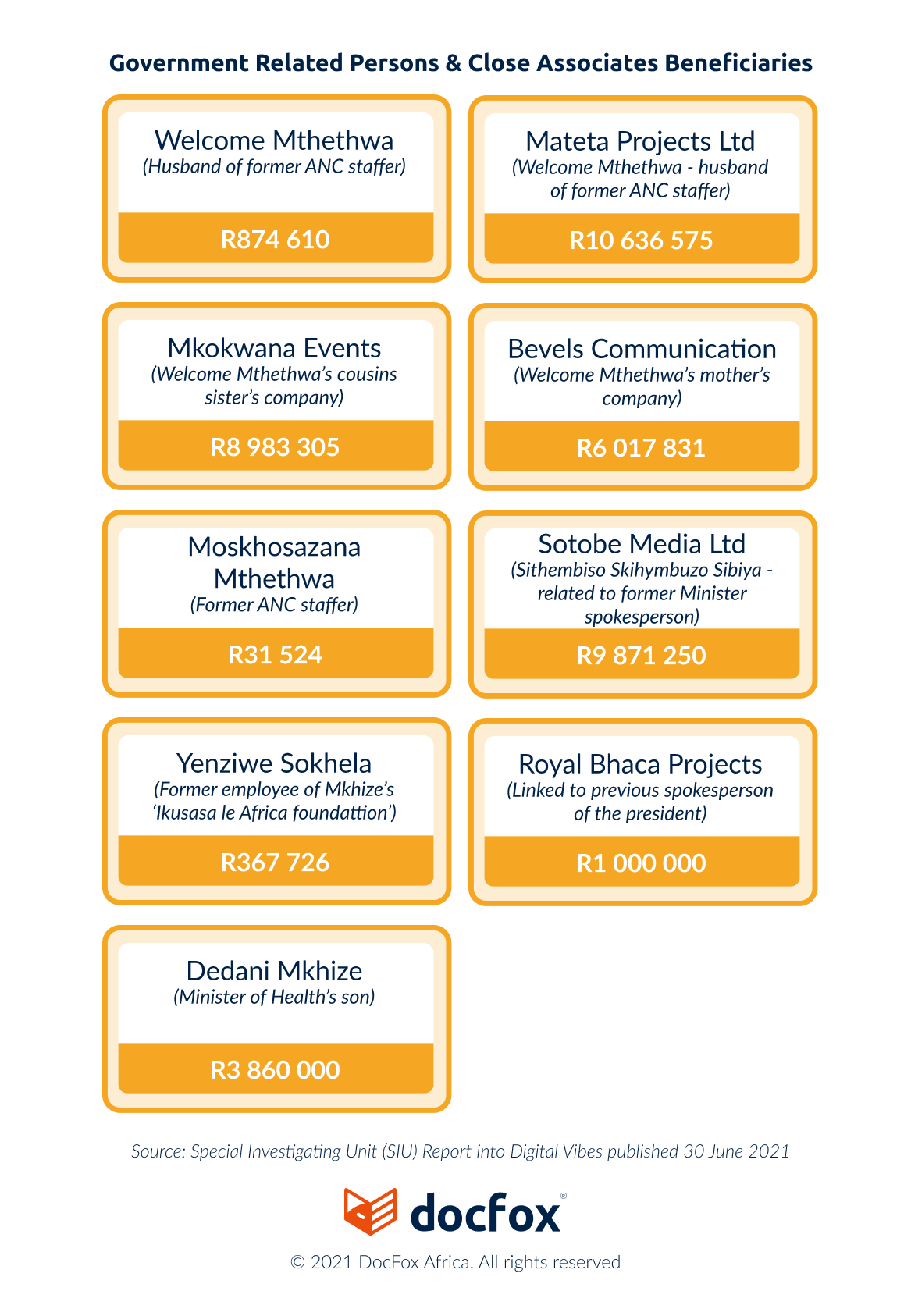